We are interested in how synapses are formed and how neural circuits function, using the nematode C. elegans as primary experimental model. The C. elegans nervous system is composed of 302 neurons, and its entire connectivity is known at the ultrastructural level. Most axons, dendrites and synaptic connections can be observed in living animals using transgenic fluorescent protein markers.  In our study, we take forward genetic screening approach (see illustration) to dissect molecular genetic mechanisms controlling specific biological processes in the development and maintenance of the nervous system.  We have also extended our findings from C. elegans to mice to examine mechanistic conservation and divergence in complex neuronal network. 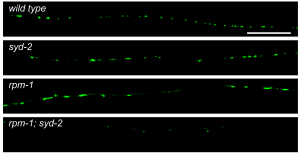 An image of regrowing axon